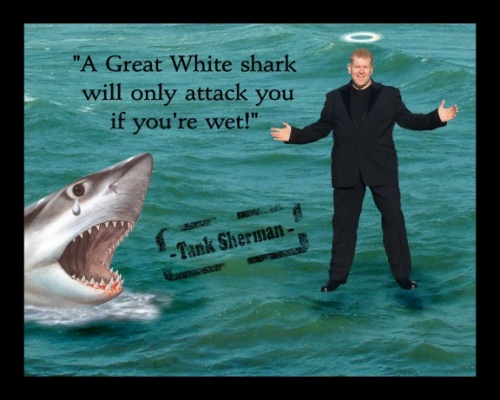 In the last few years, Tank has certainly pushed his way upwards and onwards in the comedy business and is one of the most well-known, well-loved and well respected comics in the West Country, the UK, Namibia and the Arctic Circle.

Graham (Tank) spent his school years looking out of classroom windows, and after 12 years realised that he hadn’t a clue what he wanted to do with his life.

So he got a job selling Ball Bearings in Exeter and whilst on holiday in Weymouth, entered a talent contest – which he won. That may sound good, but the other contestants were a One Legged Tap Dancer (who was suffering from an ingrown toenail) and a secretary who had learnt to sing in short-hand!

But he had the bug, he knew that making people smile and laugh was his chosen career, and after a few years had started to perform as  . . . . TANK SHERMAN.

Tank has worked alongside Jethro, both live, on TV and on 5 DVD’s, won an ITV Talent Contest, performed on TV and SKY TV. He has headlined shows at The Babb combe Theatre and done Panto with Jimmy Osmond.

Tank was the star act at the Ossington Pigeon Fanciers Ball where he had the audience eating out of his hand !!!

Not being afraid of a bit of travelling, Tank regularly takes to the skies and the Seven Seas, doing fly-backs and cruises across the globe.

Tank’s pet hate is being kicked in the backside. Another of Tanks pet hates are acts that thinks a joke or a funny story needs a swear word and foul language to make it funnier. It doesn’t. End of!