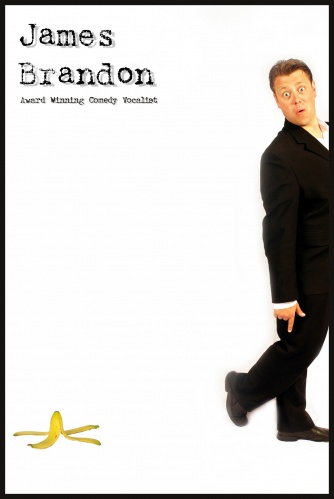 With over 20 year's experience in show business it is no surprise that James Brandon has performed in pretty much every corner of the world. From Theatre to Cabaret, Cruise ships to Television and Radio, he has a wealth of experience under his belt.

In recent years he has become a regular voice on Commercial & BBC Radio. Beginning as a Late Night presenter and eventually moving on to present his own Breakfast Show for 3 years.

James began his career as a Magician. Starting in the smallest venues, over the years he worked his way up through the ranks, eventually working for some of the World's biggest companies, entertaining clients, designing, producing and directing shows.

In the mid 90's he appeared on the BBC's Pebble Mill programme which led to a whole host of other appearances worldwide.

James has entertained in most every corner of the world, equally competent as a comedian, singer or magician & illusionist. It's a job that's seen him win a host of awards over the years.

He has written, performed and directed most of the major pantomime subjects over the last 10 years or so. He has played most of the comic parts too, from Idle Jack to Pantomime Dame.

As a comedian he cut his eye-teeth working in the Northern Working Men's Clubs creating his own unique brand of zany and off-beat humour. Over the years this has made him into one of the most unique stand-up comedy acts in the UK today.

When not performing James spends much of his time working with new talent as a vocal coach, drama and voice coach.

He is the author of the book 'Armed & Dangerous' The Performer's Guide To Dealing with Hecklers And Interruptions and is currently completing his second book: The Great British Pantomime Handbook which is due to be published soon.