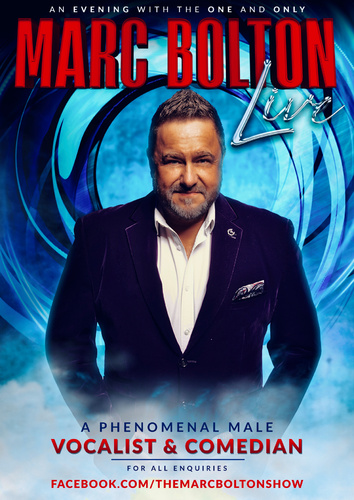 Marc has been a professional musician for 19 years (the first 11 years as a solo entertainer) mesmerising audiences around the U.K. and abroad with his uncanny vocal impressions of world renowned stars such as Pavarotti, Elton John, Tina Turner, Tom Jones, Barry White, Frankie Valli, Peter Andre, The Bee Gees and, not forgetting, his amazing take off of the 4 voices of The Four Tops.

Marc has had the pleasure of appearing with many international recording and T.V. celebrities such as Brian Poole, The Grumbleweeds, Jimmy Cricket, the late Bernard Manning and many more, all being impressed with the talent and diversity of this supreme entertainer. No wonder Marc went on to be a regular award winner throughout the Country.

After many successful years as a solo entertainer Marc went on to form the vocal/comedy double act "The New Chevrons" with fellow vocalist "C.J. Gibson". This act went on to become one of the most popular and sought after Duo’s in the business winning numerous, top awards including "Best Duo" in 2008, 2009 and 2011.

Marc’s one man show has something to please everyone with his amazing vocal ability, impressions and fun personality endearing him to audiences of all types and ages.