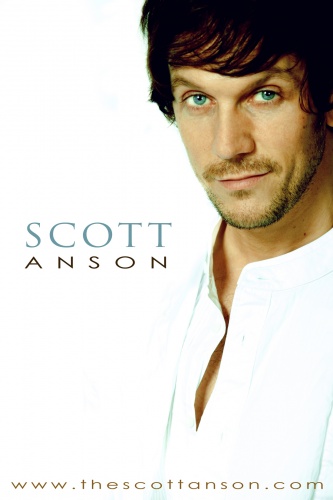 Scott's parents were both performers in clubland and it was only a matter of time before he took to the stage following in their footsteps.
Born and raised in Sheffield, Scott made his professional debut at The Crucible Theatre. He was a member of The Crucible Youth Theatre before training at London's prestigious drama school, Italia Conti Academy of Theatre Arts. After graduation Scott's first job was in ITV'S The Bill.

Scott went on to achieve great success playing the male lead in the West End musical Miss Saigon for Cameron Mackintosh, performing eight shows a week at The Theatre Royal Drury Lane. Afterwards he joined the Asian Tour playing the same role for a further two years and visiting The Philippines, Singapore and Hong Kong.
Scott also played Peter in Jesus Christ Superstar and The Narrator in Bill Kenwright's Blood Brothers in London's West End.
Scott has also worked extensively in the TV and film industry. In 2009 he was cast in the film 'Last Chance Harvey' acting opposite Dustin Hoffman. Scott has also featured in several TV Commercials for major global brands, including Kraft Foods, Toyota, Kellogg’s, The Co Op and Perfect Home.

More recently Scott has collaborated with Grammy and Ivor Novella award winning songwriter/producer Eliot Kennedy. His debut album 'Angels Of My Better Nature ‘was the culmination of this partnership. Scott signed to an independent record label and also filmed two professional music videos to accompany the album. He has performed his original material at Sheffield City Hall, alongside Peter Kay, Bryan Adams, Kenny Thomas, S Club, and Five, and he's also supported Roy Chubby Brown and Billy Pearce. In 2012 Scott performed at a sell-out concert alongside Tony Hadley and Bobby Davro.

Scott has extensive experience in the world of music, theatre, TV and film. He has also been a member of many top clubland acts including Lizzy Mac & Freedom, Matinee, and Three3. Scott also performs his solo cabaret show to appreciative audiences in clubs, holiday camps, pubs, at weddings and corporate events. His repertoire is extensive and Scott is highly skilled at working an audience and delivering great entertainment.

In 2013 Scott was cast in the brand new stage production of The Full Monty adapted by the original film writer Simon Beaufoy and produced by Sheffield Theatres. The play toured the UK selling out theatres and receiving rave reviews. More recently the show has been selected by Cameron Mackintosh and in 2014 Scott will be returning to the role in the West End at The Noel Coward Theatre.

“Just wanted to let you know that our Ladies Evening went very very well. We had a great turnout on the night, 114, and our venue was the 1882 Lounge at Burnley FC. Scott was great, and after meal and all the formalities, the Dance floor was never empty. Great mix of songs and music, and ideal with a stage and a dance floor right up to the stage. Scott had a great night, and did so well, and so many people commented on how good he sang, and the mix of music was so good. Pitched just right it seems at the age mix. As far as we are concerned we would recommend him without hesitation.”