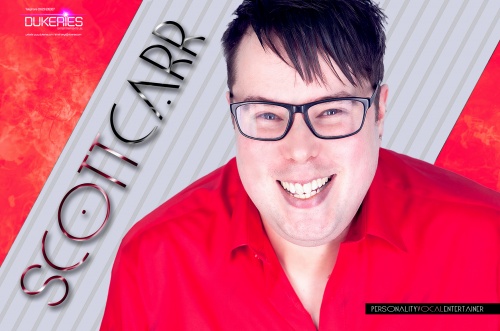 Scott has had a varied career in the entertainment business to date, from performing on a River Trent boat performing for several dozens of people to performing at open air 'Party in the Park' events for several thousands of people.

He performs a varied mixture of songs from the 50's to the present day and an eclectic selection of genre's from 'Soul & Motown', 'Soft Rock', 'Disco Classics' to 'Reggae' and 'Songs from the shows'! There is something for everyone as Scott mixes his music, patter and fun perfectly, making him a brilliant all round entertainer who is adept at involving his audience.

Scott was a featured artist on 'BBC Radio' performing live on air! and who commented "Scott is an act that will delight audiences for many years to come"

In addition to performing as a solo vocalist, Scott is also a renowned compere and host which has seen him host everything from quiz and game show nights to the Midlands 'Entertainer Awards' and even the first 'Nottingham Tattoo convention'! He has also performed in the 'Old Market Square Nottingham' and at the 'Edinburgh Fringe Festival'!

With experience performing for all types of occasions and events from 'Weddings', 'Birthdays', 'Corporate Events', 'Anniversaries' and 'Divorce parties' Scott can turn his hand to any occasion.

A superb all round entertainer.