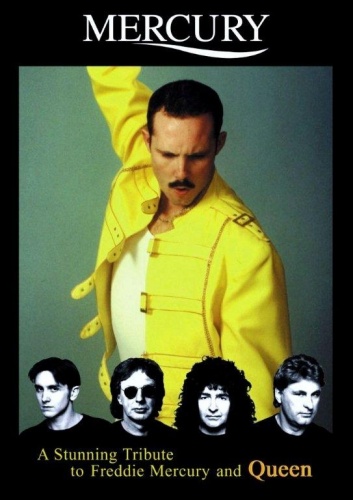 The OFFICIAL UK. No 1 TRIBUTE TO QUEEN

Over 15 years on tour, Mercury is now established as one of the world’s most authentic tributes to Freddie Mercury and Queen.

Mercury was formed in 1998 and since then has gone on to play theatres, festivals and high profile shows across the UK and Europe – from Holland to Hungary and from Majorca through to the Millennium Stadium in Cardiff.

Other prestigious shows include headlining a New Year's Eve festival in Dubai which was broadcast live to millions via MTV Asia as well as an exclusive concert for Queen’s own Roger Taylor.

And most recently being asked to perform at the unveiling of the 1st memorial to Freddie Mercury in the UK in front of Queen's Brian May and Freddie Mercury's family in Feltham.

"Freddie was an original.
He and Queen were the best.
But now in this new century,
Joseph, Glenn & Mercury are the next best thing"