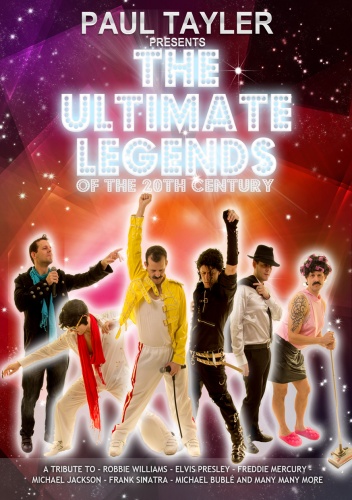 Paul Tayler is the Ultimate Showman and a multi award-winning vocal impersonator.

The Ultimate Legends Show is an entertaining, high energy, show! Paul adapts his voice and mannerisms, engaging the audience throughout the show. His Freddie Mercury features all the pomp and self-parody;  Robbie Williams, the cheekiness and arrogance; Michael Bublé the smooth and sexy approach; Elvis Presley, the hip swinging energy; and Michael Jackson - the whole performance! This is entertainment and showmanship from beginning to end!

Paul's ability to mimic almost any voice he hears, as well as his dance and performance skills, have enabled him to create amazing shows! Including Tributes to RAT PACK, MICHAEL BUBLE & ROBBIE WILLIAMS!

Paul has been a full time professional vocalist for 18 years and is classically trained which ensures he maintains his 3 Octave Range.

Paul has performed tributes to Michael Bublé, Robbie Williams and the Rat Pack touring Australia and the UK. He has won Entertainer of the Year (WA) on 3 occasions.